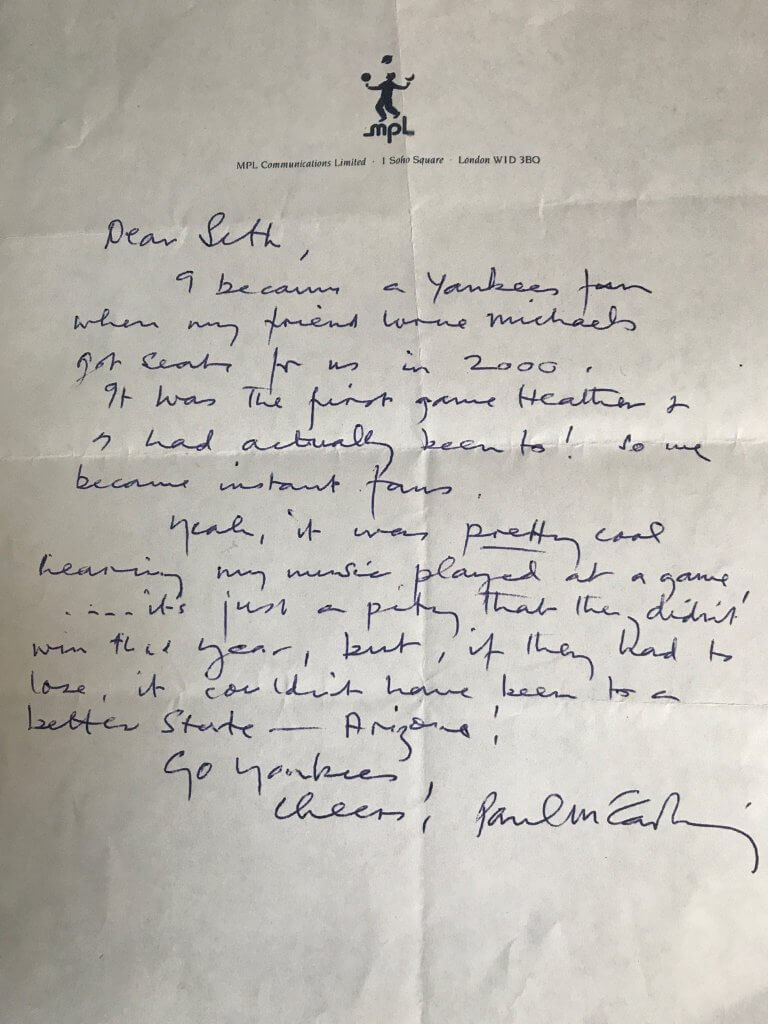 So one day––back in 2001––I go to my mailbox and there’s a regular envelope, no real markings, on the front. I open it and out pops a handwritten letter from…Paul McCartney!!! As in SIR PAUL MCCARTNEY of the, um, BEATLES!

I had written to Sir Paul through his lawyer’s assistant and asked if she would pass my letter on to Paul for a book I was writing for Crown Books––Something to Write Home About. The book included famous and not-so-famous people who had experienced an interesting or fun encounter with the iconic American sport of Baseball.

I remembered seeing Sir Paul on TV at a Yankees game at which the Beatles’ song “I Saw Her Standing There” was blasted in Yankee Stadium during the 7th inning stretch and Sir Paul got up and danced to it. I wanted to know what that experience was like for him.

But first, I had to deal with the shock of seeing the actual letter.

“Dear Seth”––like Paul McCartney actually sat down with a pen and paper at a desk and was taking my questions seriously! Or, the fact that he was directly addressing me. Or the realization that my great idol was participating in my book project! Here’s what he wrote:

I became a Yankees fan when my friend Lorne Michaels got seats for us in 2000. It was the first game Heather and i had been to! So we became instant fans. Yeah, it was pretty cool hearing my music played at a game…it’s just a pity that they didn’t win that year, but, if they had to lose it couldn’t have been to a better state — Arizona! Go Yankees! Cheers!

My first thought after reading it was that Paul had written the word “Yeah”––I thought, WOW, that hand also wrote “Yeah, yeah, yeah” once––one of the Beatles’ signature lyrics! And I loved how he thought it was “pretty cool” hearing his music at a baseball game. He’s heard his songs every day in every venue imaginable but hearing it during a baseball game was likely new to him. Such a down-to-earth guy.

Interestingly, the letter was written the same week that George Harrison died (November, 2001) and I always wondered whether writing it was a welcome distraction for Paul after such a deeply personal loss.

As “thrills” go, this one was high on my list!

1 thought on “A Letter from Sir Paul”