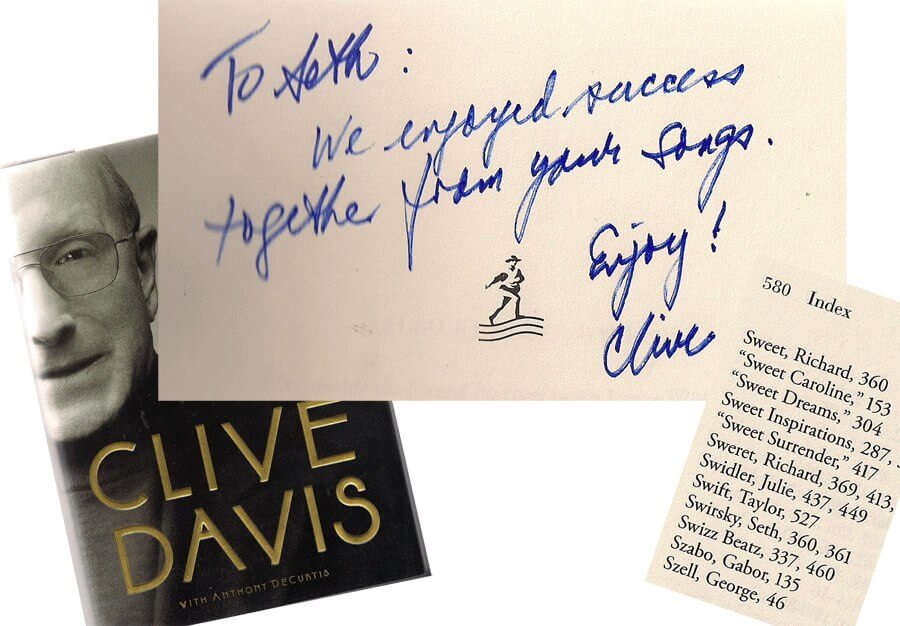 I wrote a number of songs for Arista Records recording artists over the years. The head of Arista was the music business legend, Clive Davis. He was known for, amongst other things, his great ability to pick hit songs for his many artists, who included Aretha Franklin, Barry Manilow, Air Supply, Whitney Houston and many others. So, I was anxious to buy Clive’s autobiography when it came out in 2014. The line was long at Book Soup, a popular L.A. bookstore, where Clive was doing a book signing. An announcement came saying “no pictures or conversation with Clive…please keep the line movie.” And the line was long!

When it was my turn (finally!), I said, “Clive, Seth Swirsky.” Clive said “Seth — so nice to see you here!” He got up from his well guarded signing table and stood and shook my hand. He was so warm. We talked for a bit and no doubt the throngs behind me in line must’ve thought I was someone important, coming after that earlier announcement.

Clive then took my book and signed it. I didn’t read it right then. When I got to my car, I opened it and was blown away by what he wrote: “To Seth, We enjoyed success together from your songs. Enjoy! Clive.” Wow. Coming from Clive, that meant so much to me. And still does. Then, I saw I got two mentions in his book, which was one more than many of his big-name artists. Clive Davis: a one-of-a-kind music man and person that I am fortunate to have worked with and know.