As a staff songwriter in the mid-1980s with Warner Chappell Music Company, I received a “Who’s Looking?” list every week––which consisted of many famous recording artists searching for new songs to record. I was in my mid-20s at the time, so when I saw the names of artists who I could try to write for, I couldn’t believe it! It was only a few years earlier that I was in my bedroom at home listening to so many of these great artists––their music blasting in my headphones. To think that I might now have a chance to have even one of them record one of my songs was surreal to me, to say the least.

When I saw on the list that Michael McDonald of the famed Doobie Brothers was looking for songs, I just had to give it a try. But I found out that he had a very tight inner circle of people he wrote with and that it was next to impossible to write a song for an already established and great songwriter like him. Still, I was determined.

A short time later, I was in my music publisher’s office in L.A. when I heard someone mention the name David Pack––the lead singer and songwriter for the band Ambrosia, who co-wrote and sang lead on the mega-hits “How Much I Feel,” “Biggest Part of Me,” and “Can’t Let A Woman,” among many other worldwide hits.

I interrupted the conversation and asked: “Do you know David Pack?!!” Whoever mentioned his name said yes and I asked if he could set me up to write with him. The guy very graciously said “yes” and before I knew it, I was in David’s studio––a renovated bank in Sunland, CA…again surreal––and we hit if off right away, talking about our shared love of The Beatles, et al.

It turned out that David Pack was a close friend of Michael McDonald and when I told him that his good friend was looking for new songs and I would love to collaborate with him on this project, he was all in.  I played him some ideas, which he really liked, but he wanted to start a new song from scratch.

Let me tell you, David Pack is not only a warmhearted guy, but also a musical genius! Very focused, he immediately programmed a beat and then started playing keyboards. I was intimidated because he came up with ideas so quickly that I realized every contribution I made had to be on the same level. It is difficult to write with that kind of pressure, and then he started to sing! Well, that familiar voice which was all over the radio (“The Biggest Part Of Me”, “How Much I Feel”) in the ‘70s was amazing! And although David Pack is deaf in one ear, his pitch is totally perfect and he never hits a bad note!

Fortunately, I did come up with some good ideas and we completed a song called “Sacred Love” and sent a demo to Michael McDonald, who ended up passing on it.

Oh well. But later, that same week, I went to the home of another amazing songwriter Gardner Cole (Madonna, Jody Watley) and wrote a song with him called “Tear It Up” that Michael McDonald DID record for his upcoming album. I remember hanging out with Gardner’s girlfriend, who was the daughter of the former Los Angeles Rams Quarterback (and coincidentally my favorite player) Roman Gabriel. Life…can’t beat it!

“Tear It Up” came out as a single; a video played all over VH-1 and MTV and it made the Billboard charts in the U.S. and England. So, it was an amazing, double-thrill to write a song with David Pack and to have a song recorded by Michael McDonald, all in such a short span.

Oh…David Pack ended up recording the song we wrote together for his own solo album a few years later. The excitement of Michael McDonald’s voice on one of my tunes was beyond thrilling to me, but, writing and recording with one of my teenage-years heroes was definitely one of the personal highlights of my career.

The pre-cellphone picture below is of me and David Pack in his studio. My hand is playing the chord on the guitar he’s holding. 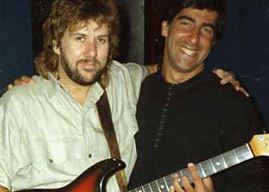