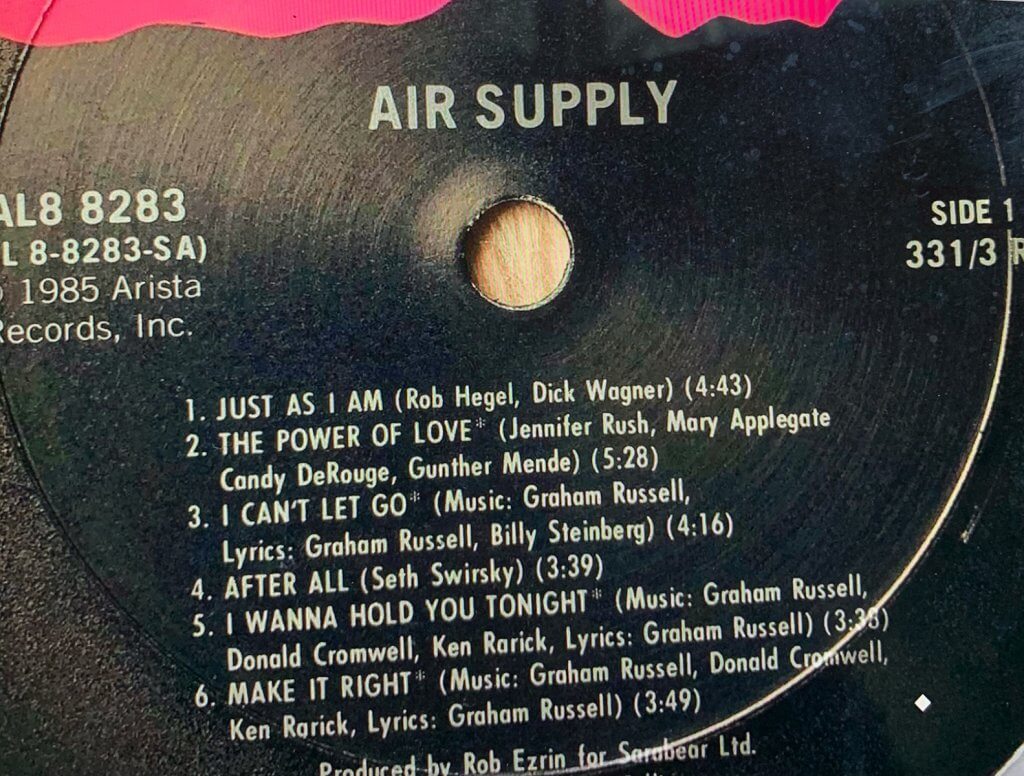 Timing is so much in life. It certainly was in recounting the very first time a song of mine was recorded by a major artist.

I was working in the tape room at the venerable music publishing company, Chappell Music, splicing the latest songs sent to the company by its vast stable of songwriters, (which included Barry Gibb, Sting, Boy George, among many others). This was New York City in the early 80’s. Exciting music and exciting times for a 23 year old a year out of college.

The phones would ring off the hook at Chappell from producers or managers or record company executives trying to find the next hit song from one of our writers to match with their artists. We were the #1 song factory in the world. Chappell’s songwriters of the past included George Gershwin, Irving Berlin and Cole Porter––along with great shows like A Chorus Line, West Side Story and The Fantasticks––written by Chappell writers.

Artists from around the globe wanted the songs our writers wrote. As a music publisher, Chappell made money from eventual record sales when those songs got recorded, along with radio airplay, especially if the song became a “hit single”.

I used to stay late at Chappell’s offices every night, alone. I just loved being around all that music. My boss, and the man who hired me was a legendary “song plugger” named Irwin Schuster. He had published one of my first songs while I was a junior in college and Barbra Streisand almost recorded it. She instead chose a song written by some guy named Andrew Lloyd Webber. Oh well. But, my take-away from that experience was that I could play in the big leagues. That was a big lesson at that time.

One Friday night, Irwin left his huge office overlooking the Hudson River on Manhattan’s West Side at the usual 6 p.m. I loved when I had the office to myself so I could go into his office and sit at his piano and write songs knowing I was in the presence of some of the great songs by the greatest songwriters in history.

I literally felt on top of the world in that 31st floor office overlooking the lights of the big city.

On this particular night, Irwin’s phone rang. He had left hours earlier, but we were allowed to answer and take messages. I picked up his line and said, “Irwin Schuster’s office.” The voice on the other end said, “this is David Kershenbaum calling from L.A., is Irwin there? I need a song for a major artist I’m producing.” Kershenbaum was a very hot producer at the time. He had signed and produced Joe Jackson’s “Stepping Out” album and was working with Duran Duran and later Tracey Chapman. In short, he was a very big deal.

I said, “Well, Irwin left for the day, but can I help you with anything?” He said, “I’m looking for a song to produce for the group Air Supply for their next record.” I said, “Can you tell me what kind of song you’re looking for so I can tell Irwin.” He responded, “I’m looking for a mix between a bouncy 8th note Hall & Oates-type song like “Kiss On Your List” mixed with a Jim Steinman epic-sound thing.”  As I was writing this all down it dawned on me that I knew exactly what he was looking for and that I could write it!

So, I said, “David, I HAVE the song you’re looking for!” He said, “you do? Awesome! Can you send it to me by Fedex so I get it by Tuesday here in LA?” I said, “Yes. You will have it on your desk at A&M Records on Tuesday. He said, “Great! I’m glad to meet you and I’m looking forward to hearing the song.”

I hung up the phone and said to myself, “Okay, you better go and write the song I just promised him!”

So I sat down at the piano in Irwin’s office and working deep into the night wrote a song called After All. It all just fell out as if it was supposed to. The next day, I called some guys I knew in a rock band and we set a time to meet to record a “demo” of the song I had just written.

I sent the demo of the song the next morning to David Kershenbaum. On Tuesday night, I get a call in the Chappell office. It’s David Kershenbaum. And he said to me: “You were right: This is a SMASH for Air Supply. DO NOT PLAY IT FOR ANYONE ELSE!! I want you to put a “Freeze” on the song immediately!” (A “Freeze” is a music business term for giving him exclusive rights to record the song first). Air Supply was one of the biggest acts in the world at the time. I put down the phone not quite believing what I had just heard.

As it turns out, Kershenbaum fell off the project but before he did, he played the song for Arista Records President and music-business legend Clive Davis who loved it. He asked Bob Ezrin (the guy who produced Pink Floyd’s “The Wall”) and he loved it too.

There was a saying in the music business when there were still records: “It’s not final till it’s vinyl!” It means, don’t celebrate anything until you actually see the song on the album itself. Artists usually record 14 songs and take two off at the end so I was in limbo emotionally until the head of A&R at Arista wrote a note to Irwin saying “Tell Seth he made the record!”

The word “elation” took on a whole new meaning. To see your name on an LP after playing LP’s since you were 5, was a real ‘moment’. I had to read the label with my song title and name at least 50 times to make sure it was really there.

Then, to place the needle from the recording arm on my song…crazy. It wasn’t long afterwards, that I made a long-term publishing agreement with Chappell as a staff songwriter. The album went “Gold” in numerous countries––Japan, The United States, Australia, Canada––all my first “Gold Record” awards. They hang in my house to this day, but the story of basically the beginning of my career as a professional songwriter is one I’ll always treasure.