Two outs with bases loaded,
The final Series game,
The Cubs were but a strike away,
From popping the champagne.

The breathing of the multitudes,
Was for a moment still,
As they all stared at the starter,
Mulrooney On The Hill.

Two outs with bases loaded,
The final Series game,
The Cubs were but a strike away,
From popping the champagne.

The breathing of the multitudes,
Was for a moment still,
As they all stared at the starter,
Mulrooney On The Hill.

The catcher called for a breaking ball,
That pitch would surely do it.
Mulrooney went into his stretch,
Then twisted back and threw it.

“Ball one,” the grumpy ump barked out,
As though the crowd were hard of hearing.
But all was deadly quiet,
The denouement was nearing.

The catcher thrust three fingers down,
Now calling for the slider,
And it surely would have been strike three,
Had the plate been 2-feet wider.

“Ball two,” declared the man in black,
From close behind the plate,
Still, one more strike would do the trick,
But the fans would have to wait. 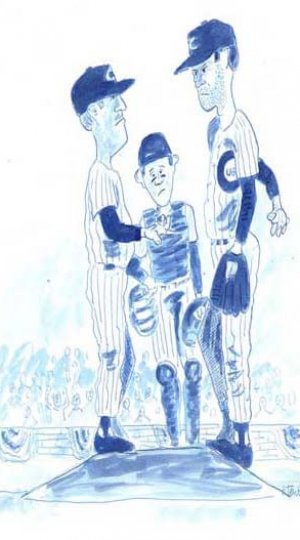 For quickly to the mound stalked
The manager to see,
If his ace still had the stuff,
To nail down strike three.

“You’ve had enough, kid,” said the coach,
In a rolling, southern drawl,
But Mulrooney would not listen,
And would not give up the ball,

“I’ll get him, boss,” the hurler said,
“I swear, this time I will,”
So queasily, the skipper left,
Mulrooney On The Hill.

Some vocal fans yell. from the stands,
“C’mon, Mulrooney, get ’em!”
While others kept things to themselves,
For fear they would upset him.

The next pitch was a splitter,
Which he threw with extra zing,
And it almost fooled the hitter,
But he held up on his swing.

“Ball three,” cried out the umpire,
And everybody knew,
That another ball would tie the game,
The count was 3 and 2.

He knew then if he blew it,
He would join a special circle,
With guys whose names included Buckner,
Snodgrass, Moore and Merkle.

So, to himself, Mulrooney said,
“This ain’t no time to fiddle.
I gotta’ throw my finest pitch,
A fastball down the middle.

Shaking off his catcher’s cue,
The pitcher blazed his heat.
The scene seem in slow motion,
As the crowd rose to its feet.

The ump looked at Mulrooney,
As the rain began to pour.
Then, 50,000 heard his words,
Those dreaded words, “Ball four.” 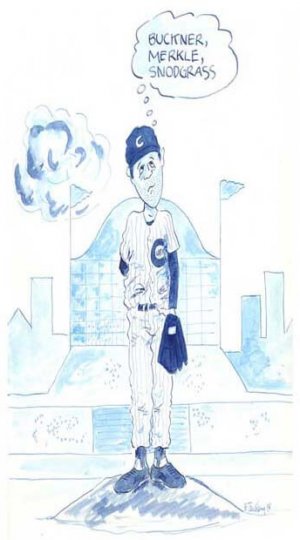 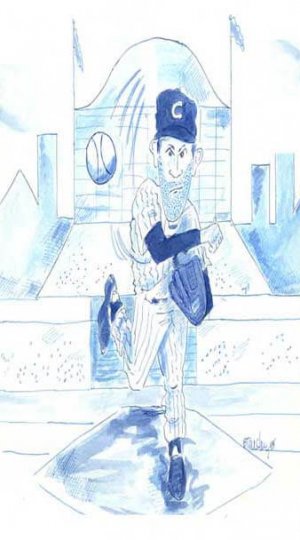 And as the tying run touched home,
There came a crackling sound
A silver bolt of lightening
Had struck the pitcher’s mound.

As you may have guessed by now
The next man up came through,
And parked Mulrooney’s first pitch
Onto Waveland Avenue.

The baseball gods were speaking,
To every Cub believer,
When in doubt, replace Your ace,
With your best reliever.

Many years have passed since then,
And yet the bitter pill,
For Cub fans is the memory of Mulrooney On The Hill.