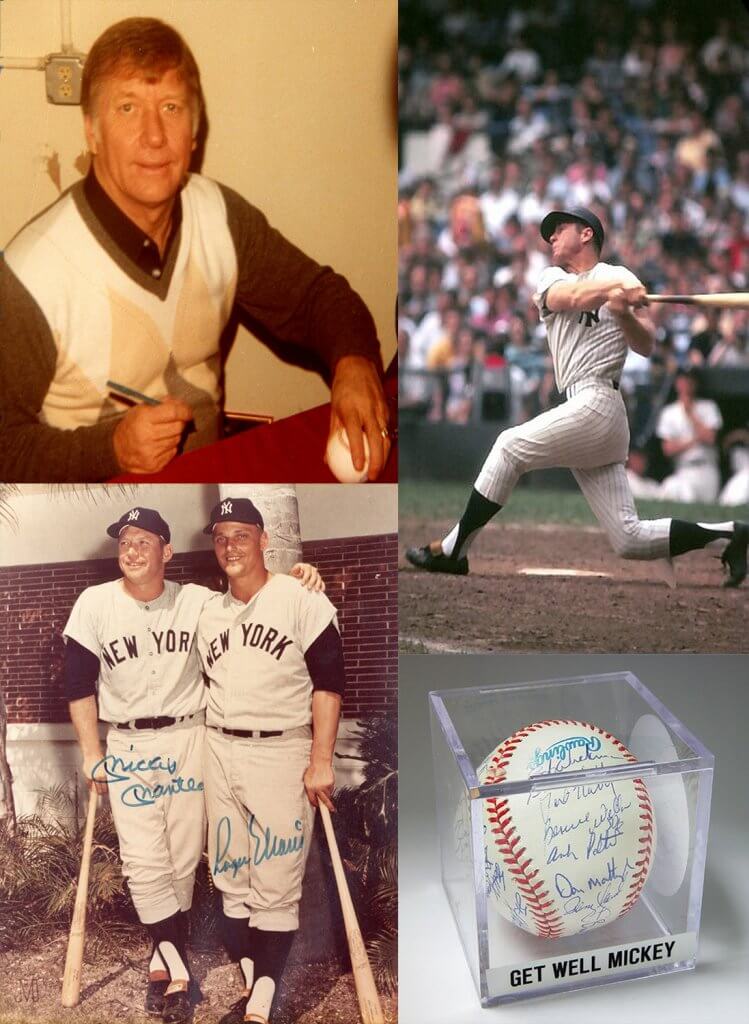 In the fall of 1994, I went to my first baseball memorabilia show in San Francisco. One of the reasons that I was compelled to go was that Mickey Mantle would be signing autographs. I loved “The Mick” growing up, even though he  was at the end of his stellar career. Despite this fact, I could never forget the way he jogged so gracefully around the bases, like a Roman god, after hitting his powerful home runs.

The line to get his autograph was not very long, surprisingly. Maybe, twenty people.The guy before me in the autograph line had a photograph of Mantle with Roger Maris. Maris had signed the photo, a few years before his death in 1985, and the guy wanted Mantle to sign a photo, alongside Roger’s name. Mickey and Roger were forever linked in baseball lore because of their famous home run race in 1961 where Roger outpaced Mickey and hit a then record 61 home runs in a single season, breaking Babe Ruth’s, seemingly insurmountable record of 60, done in 1927.

Mantle was very moved by the photograph. He and Roger were very close. Then, in a reflective voice that revealed his sentimental nature, he said: “That’s Roger,” as he looked at the photograph long and hard, seeming to take an emotional trip back in time to his and Roger’s great days  with the Yankees.

Then, it was my turn. It was definitely surreal to meet him. I stuck out my hand and told him what an honor it was to meet him. Mantle gripped my hand and I’ll never, ever forget two things. First, how big his hand was — it completely enveloped mine, like no other handshake has before or since. And second, that his was the handshake of a warm person.

I took the opportunity to ask Mickey one question: “Out of the seven world championship rings he had won and the three MVP awards he achieved, which ring did he wear?” He told me that it was his 1974 Hall of Fame ring that he treasured above all others, because, as he put it: “Whitey [Ford] and I went in (to the Hall) together.” Ford, the Yankees ace pitcher was Mantle’s best friend. Then, Mantle took off his ring and showed it to me.

I walked away from my encounter with him feeling humbled to be in the presence of one of the great athletic heroes of the 20th century, and, needless to say, one of my heroes growing up. A few months later, Mantle was diagnosed with cancer. He died on August 13, 1995, and I realized that I had been at Mantle’s last signing, just 9 months earlier.

Years later, when the Mantle family auctioned off many of Mickey’s mementos, one item stood out to me: a baseball signed by the entire 1995 New York Yankees team in honor of Mantle, as he lay dying. On the plastic cube housing the ball, a piece of tape said: “Get Well Mickey.”

Whitey Ford, flew in to spend the last few days with Mickey and he gave him this baseball.

Mickey, known as a great teammate above all else, treasured that ball and kept it by his hospital bed. It was a real honor to have met The Mick. He gave a lot of people a lot of joy, including me, the day I had the good fortune of meeting him.

When the Mantle family sold most of Mickey’s memento’s, I bought this baseball as I knew it gave Mickey some of his last happy moments.

This website uses cookies to improve your experience while you navigate through the website. Out of these, the cookies that are categorized as necessary are stored on your browser as they are essential for the working of basic functionalities of the website. We also use third-party cookies that help us analyze and understand how you use this website. These cookies will be stored in your browser only with your consent. You also have the option to opt-out of these cookies. But opting out of some of these cookies may affect your browsing experience.
Necessary Always Enabled

Any cookies that may not be particularly necessary for the website to function and is used specifically to collect user personal data via analytics, ads, other embedded contents are termed as non-necessary cookies. It is mandatory to procure user consent prior to running these cookies on your website.