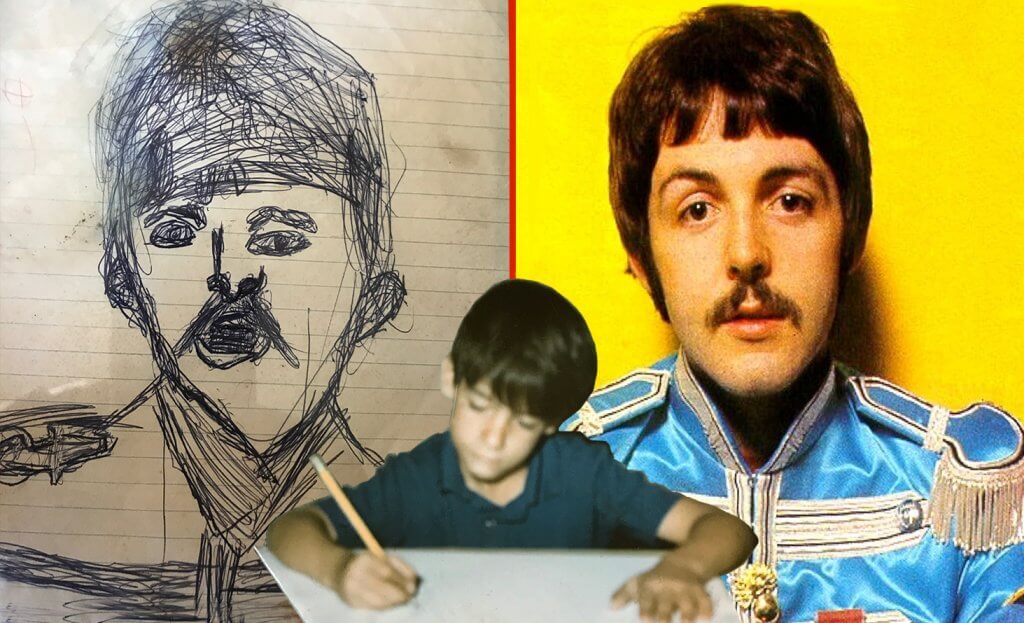 Me, age 8, drawing the picture of Paul from the inside of the Sgt. Peppers album.

I thought you might enjoy a story of what it was like when a very longtime fan of yours had the opportunity to meet you, unexpectedly.

When I saw you running on the treadmill at my gym, it didn’t register for a good long moment that it was you in the flesh. I couldn’t help but walk over––not to get an autograph or a picture–– but to see if the treadmill next to you was taken. It wasn’t!

In the hope that you would allow me a “hello,” I took that spot.

Could you ever really know how deeply you affected so many people’s lives like mine? I was born to 18 year-old parents in 1960. They bought Beatles records from the beginning in 1964, so I “got” it all at a very young age.

By 7 years old, in 1967, I was taking guitar lessons already knowing what I wanted to be when I grew up: You!

By 8 years old, I was playing “Hey Jude” and “Yesterday” in front of my entire grade school assembly. At that age, I thought John was very cool, I liked George just fine and Ringo sang “With a Little Help From My Friends” and “Yellow Submarine,” both of which made me feel as good today as they did back then.

But, you were the absolute coolest! Inspired by you, I became a staff songwriter with Warner-Chappell Music and EMI Music for over 20 years, writing hits for a number of artists and becoming a recording artist myself. So, to have a chance to even just say “hello” to you would have been a major life thrill.

So, back to the treadmill. I got on the one next to yours. Inconspicuously. But I made sure I wasn’t giving out the vibe that I was just another fan looking for an autograph or something.

I noticed out of the corner of my eye that you had turned up the speed on your machine to seven miles per hour. That is really fast for someone even half your age (nearly 67 at the time). I was impressed and felt I had to at least match that!

So, I put the speed of my treadmill up to seven miles an hour and scrambled in my mind for something I could say to you if you gave me that half-a-second “opening.”

Unbeknownst to you, for the past five years I’ve been making a documentary called Beatles Stories, which consists of filmed interviews with a myriad of people who have a cool story about themselves and The Beatles. While trying not to fall off the treadmill, I was thinking of who I’ve interviewed who would impress you. Graham Nash? No. I needed someone more personal to you. Perhaps, Sir George Martin? No. You’ve known and worked with him for so long that a mention of his name wouldn’t intrigue you. Sir Ben Kingsley, Art Garfunkel, Justin Hayward? My mind was scrambling as I noticed you ramping down your machine. Six miles per hour, five miles per hour…I had better think of someone quickly…

Then, as your machine stopped and you started toweling yourself off, I noticed you turn slightly towards me as if to say, “Ok, you look like a Beatle person. I’ll give you a chance to ask me a question.”

That’s when I turned to you and said, “Sir Paul, I’m making a documentary and a few years ago I interviewed your original engineer, then 83 year-old Norman “Hurricane” Smith (Norman was not only at The Beatles audition in June, 1962––in which he re-mic’ed Paul’s amp so that they would pass the audition––but he was their main recording engineer for every song they did up to and including the Rubber Soul album. In short, Norman helped make “the sound” of The Beatles).

I can still see how your eyes lit up at the mention of Norman’s name! I told you that I really understood how ‘you guys’––as I said it––could love someone like Norman, because, in my afternoon at his home in Sussex, England, I too had an instantaneous great affection for him. I remember telling you that my impression of Norman was that he was like a favorite uncle that you loved because he let you do stuff your dad might not. He’d be mischievous with you.

Then you said, as we stood face-to-face: “Yes, you’re exactly right. We were young guys (as I’m thinking, THIS IS PAUL MCCARTNEY TALKING TO ME ABOUT THE BEATLES!!!) that took a great liking to Norman. He was, as you say, like an uncle to us, very playful and fun.”

We talked a bit more about Norman and you stayed facing me, never giving me the feeling of “Okay, you’ve had your Beatle moment now, now move on.”

Then, unexpectedly, you asked me my name as you put out both your hands and took my hand and shook it. Then you said to me: “Thank you very much for bringing up this memory for me today. It was a real gift.”

I couldn’t believe that the man who had been such a massive influence in my life was so decent, so kind, so human.

So, thank you, Sir Paul, not only for your unparalleled music but also for being the really cool person I hoped you would be if I ever got to meet you.