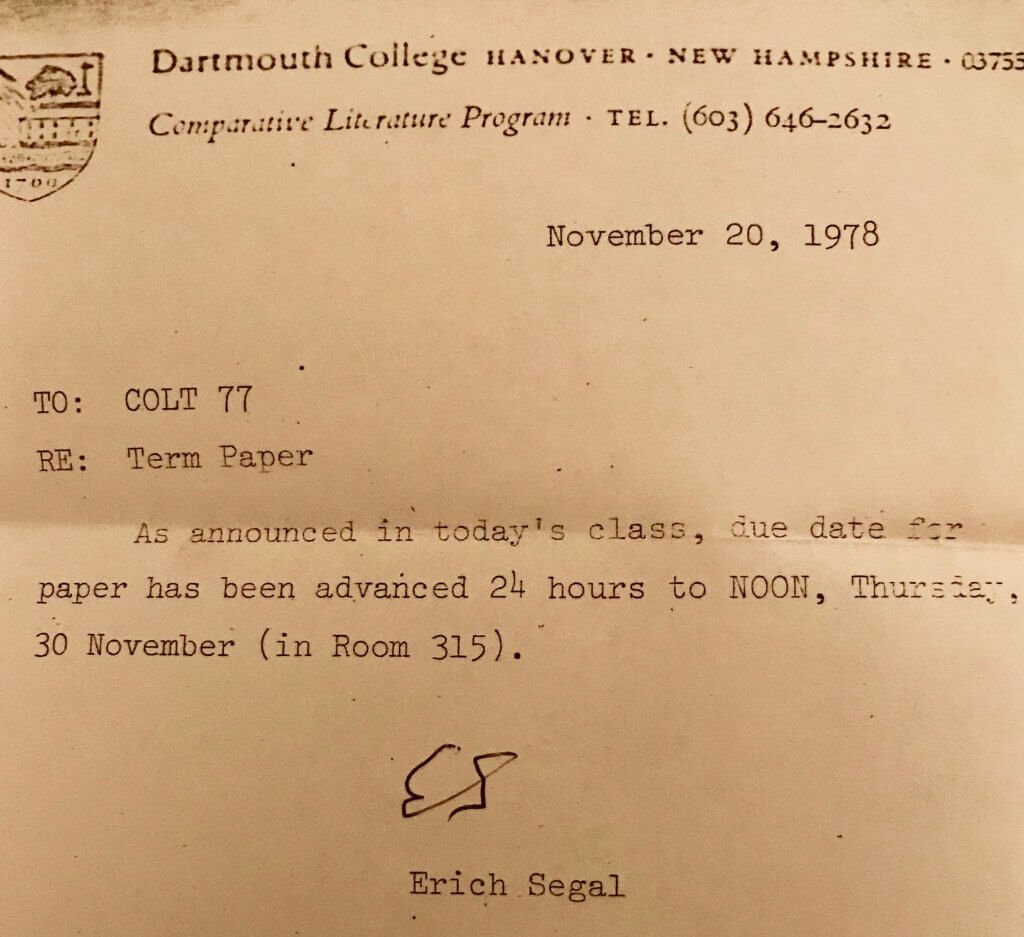 It was so exciting to choose my first classes as a freshman at Dartmouth College, September of 1978. When I saw that Erich Segal was teaching a class I just had to take it. He was but a few years removed from writing the #1 bestselling book and movie of 1971, “Love Story.” Plus, he wrote the screenplay for The Beatles’ “Yellow Submarine” (1968).

The class he taught that fall was “Comparative Classical Greek Comedy and Tragedy,” a subject in which he was a world-renowned scholar. The class could have been “Barbecuing During the Civil War” and I still would have taken it—it was Erich Segal!

There were about 15 people in the class of which I was one of only two freshmen. I was definitely intimidated to be in a class of mostly seniors and with this very learned professor. I was a good student, but nowhere in the league of the upperclassmen.

Erich was a fantastic teacher, completely engaged in the subject matter. I remember thinking to myself, sitting there in 210-year-old Dartmouth Hall, with the leaves outside changing to gold, orange and red, listening to Erich excitedly compare Aeschylus to Sophocles: “This is really College!”

After the third class, I strategically waited until the other students exited so I could hang out with him and ask him a few questions. I was happy at how amenable he was when I asked him his thoughts on “Love Story” (he was thrilled at its success but not so thrilled that it may have diminished his standing as a scholar).

He also said that while writing “Yellow Submarine,” John Lennon called him at 3 in the morning to suggest, “Wouldn’t it be great if Ringo were followed down the street by a yellow submarine?” Erich then wrote that scene into the script. You can only imagine how this wannabe-Beatle freshman—me —reacted to that reminiscence. I was so agape in awe that I had to remind myself to close my mouth.

I remember nervously opening up the envelope with my grades at the end of the term and there it was— a “B+”! Erich has given me a B+! Wow. Maybe I could actually survive the Ivy League!

Thank you, Erich, for giving us your scholarly and entertainment-based books, your imaginative screenplays and me a B+ in your class, which gave me much-needed confidence at the beginning of my college career.