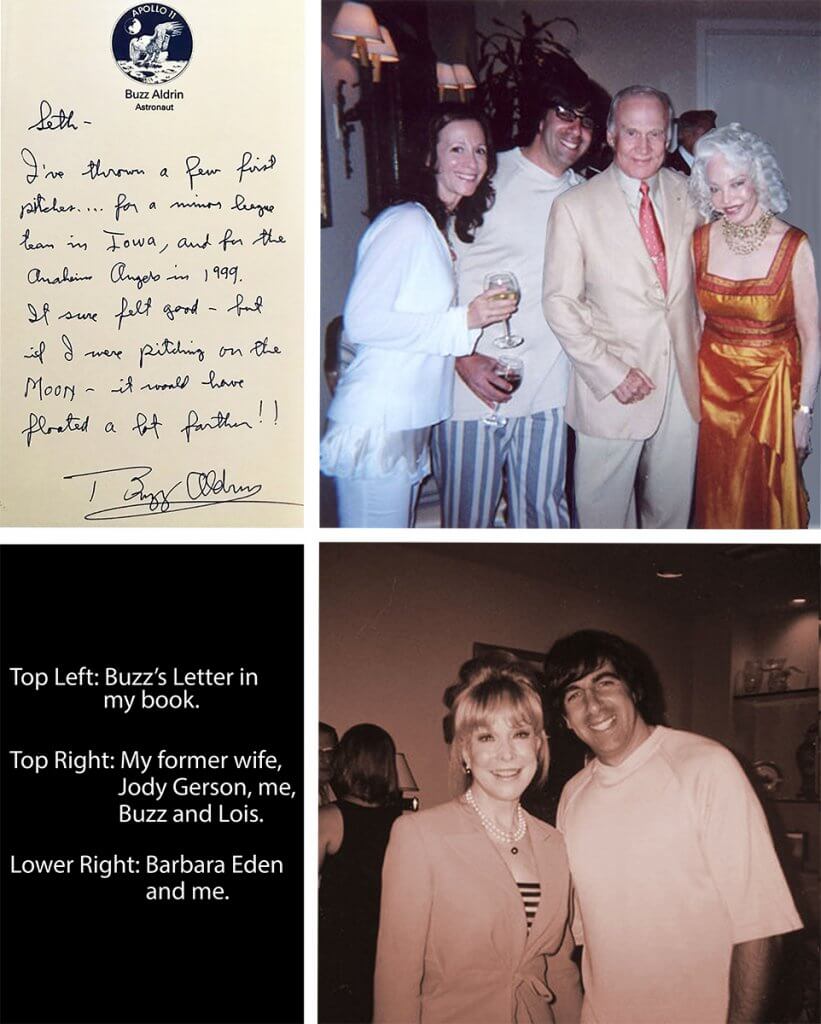 My third book on baseball had just come out (“Something to Write Home About,” Crown Books, 2003). One of the contributors (via, a handwritten letter) was Buzz Aldrin, the second man to walk on the Moon. I wanted to give him the finished, just-released book, personally.

Somehow, I was invited to his apartment on Wilshire Blvd. I was greeted by his then wife, Lois. It was about 8:15 in the morning. Buzz was in the corner of his living room, on his knees, looking up through a telescope when his wife yelled out, to my surprise: “Buzz, it’s too early to see the Moon! We have a guest.” I just loved that this was what this couple (that included an original moon walker!) bickered about. Buzz kind of grumbled back and came into the living room. I showed him his entry in my book and signed it for him.

Lois started leafing through the book and asked if I could send signed copies to their friends, Jackie Autry (then, owner of the Anaheim Angels baseball team) and George Argyros (then owner of the Seattle Mariners team). Thrilled that Buzz and Lois liked the book, I, of course, happily agreed.

Then, out of the blue, Buzz asked if I’d like to come to his upcoming birthday party. I said great, yes!

Two weeks later, I went to the party and found myself hanging out with the actress Barbara Eden––y’know “Jeannie”––who I, like many other grade schoolers, “dreamed of” every Monday night during the second half of the 1960s. Funny, in one episode of her show, her character granted wishes to an astronaut––and here she was at Buzz Aldrin’s party. Crazy!

The wine flowed and before I knew it, I was asking Buzz about Apollo 11’s descent from the moon, where he and Neil Armstrong were close to running out of fuel. I asked how close they really were to aborting the landing and he said “closer than you think, but Neil was an incredible commander and in total control.”

Buzz is a true American hero (a fun trivia note is that his mother’s maiden name is “Moon”). I’ll always be grateful to him for contributing to my book and for having me as a guest at his memorable birthday party.

As an aside, a few months later I got a Christmas card from Buzz and Lois, depicting them standing on the moon, with the words, “From The Moon To You, Merry Christmas From The Aldrins.” Life, right?