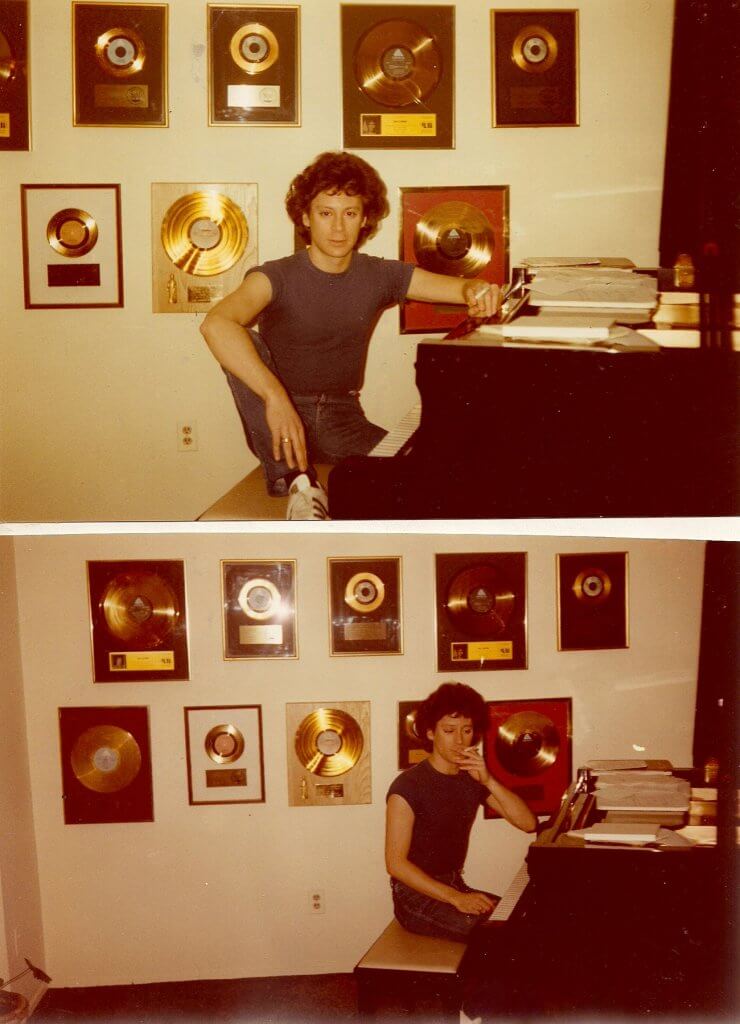 I loved the group The Raspberries growing up. Great power pop music. My favorite songs of theirs are “Go All The Way”, “Overnight Sensation” and “Tonight” and that’s just to name a few. Eric Carmen, was their lead singer and main songwriter. When the group disbanded he went on to a very successful solo career, writing and singing songs like “All By Myself”, “Hungry Eyes” and many others. Great writer, singer and musician, he was definitely in the select group of artists I wanted to emulate musically.

Right after I graduated from college, in 1982, I got a job at Chappell Music, where my main responsibility was to make large reels from the songs our songwriters sent in. I was right in the heart of the music business and it was very exciting. One day, a co-worker needed me to get a cassette of one of our new songs to the west coast office of Columbia (before it was Sony) Records. I went to the “C” on his Rolodex to get the address. The first “C” name however on his Rolodex was “Eric Carmen”. With his address and phone number. I remember thinking, ‘that can’t be THE Eric Carmen…you know, the guy made the album, “Boats Against The Current” and wrote and sang “Let’s Pretend” with The Raspberries…” Then, I saw that Eric had a Cleveland address which made clear that it was, in fact, THE Eric Carmen.

So, like any ambitious 21 year-old who had access to one of his idols, I just dialed the number. Two rings later came: “Hello, this is Eric”. I introduced myself and he was immediately taken by the fact that I called him. In fact, we talked for at least a half hour. He was impressed that I knew all of the songs on his latest record. At the end of the call he said, “if you’re ever in Cleveland, come by my apartment and hang out.”

Well, wouldn’t you know, my dad happened to be taking a business trip to Cleveland the next week and before I knew it, I was in Eric’s apartment. He was like an older brother. Very nice guy. He wanted me to hear some of the songs he was working on. They were of course, staggering and ended up on some of his late 80s records. I asked if I could take some pictures of him at his piano and he said “sure” (the picture atop, are those shots).

When I told him I wanted to be a songwriter he said he saw a lot of similarities between us and encouraged a collaboration if I had some lyrics I needed music to. Back in New York, I wrote a lyric entitled “A History of You” and sent it to him. About a week later, he sent me a cassette with him singing the first Carmen-Swirsky song, renamed, “After You”. You  can hear it here.

I then had an idea for a country-type song that I called “The High Cost of Loving”. I sent it to Eric and again, about a week later, a cassette arrived with Eric singing this newly created song. One moment, I’m taking Finals at Dartmouth College, 2 months later, I’m writing songs with Eric Carmen!

Eric taught me a number of things as a budding, professional songwriter. One was something Pete Townshend taught him: The song—before you ever hear any music — starts with the title. So, make sure the title is terrific. The seance was about confidence. Eric said that songwriters are naturally insecure but that after you’ve written a number of songs and had some success, you can never write a bad song. He said that he may write songs that are not amongst his top songs, but that, none of his songs could be outright “bad”. That, once you learn the craft and have done it a lot, your confidence level should elevate. That advice was extremely important to me then and even now.

He also said that writers –novelists, included– usually have one thing they are compelled to write about and that they write about it over and over again. For him, it was unrequited love. He said, it stemmed from his high school years and almost all of his love songs were propelled by feelings and experiences from that time.

Over the years, Eric and I stayed in touch and hung out a bit. I was quite flattered that he mentioned me in his autobiography.

Thank you, Eric for being a great collaborator, mentor and all around, great guy!

1 thought on ““All By Myself” with Eric Carmen”