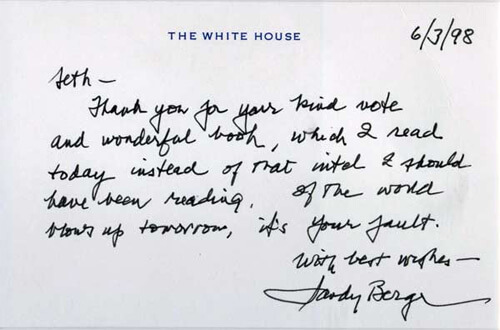 In 1998, about two years after my first book, Baseball Letters, came out, I saw an interview on Meet The Press given by President Bill Clinton’s National Security Advisor, Sandy Berger. During the interview, Berger spoke of his love of baseball, so I decided to send him my book and I inscribed it to him personally.

Around this time, Pakistan and India, both countries with massive nuclear capabilities, were once again arguing about the long-disputed Kashmir region that they both claimed. It was an extremely tense time, I’m sure, for the world and specifically, the major players at the White House, which included, of course, Berger.

About two weeks later, I got an unusual note back from Berger on a White House card that said: “Seth– Thank you for your note and wonderful book, which I read today instead of that intel (intelligence) I should have been reading. If the world blows up tomorrow, it’s your fault. With best wishes–Sandy Berger”. Wow!